Episode 12: Leave Her to Heaven 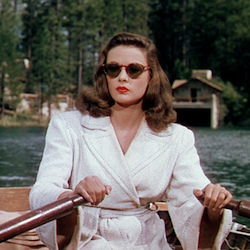 Dear listeners, you are in for a real treat this week. Our regular crew is joined by special guest star Sharon Stiteler (aka Birdchick) for our episode about Leave Her to Heaven!

We highly recommend you watch the film before listening to the episode, because we spoil the film. Like, a lot. You want to see the movie. While this movie isn’t on most of the usual streaming channels, there are a couple copies on YouTube, and it can usually be found for DVD rental.

Also, during the episode, we start talking about the Haunted Mansion at Disney theme parks. Here’s a quick correction: Melissa says that Thurl Ravenscroft is the voice of the Ghost Host, which is only sort of true. Mr. Ravenscroft is the Ghost Host on the album, Story and Song from the Haunted Mansion. The actual Ghost Host you hear during the American ride is Paul Frees, who is also awesome but who is not Tony the Tiger.

Also, here are some links that are relevant to this episode:

Join us on November 21st for our episode on Akira Kurosawa’s Stray Dog!